At a time when Priyanka Chopra is busy promoting her upcoming film The Sky Is Pink, husband Nick Jonas has given his final verdict on the film. Nick, who has been busy with his Happiness Begins Tour, took to social media to praise Shonali Bose’s directorial venture. With still two days left for the release of The Sky Is Pink, the first review of the film is out.

Nick, who watched The Sky Is Pink recently, revealed that the film touched his heart in many ways and urged people to watch the film. He also said that he is very proud of Priyanka for doing a film like The Sky Is Pink.

Sharing a poster of The Sky Is Pink, he wrote, “This film touched my heart in so many ways. The story is bold and beautiful, and told perfectly by this incredible cast and by @shonalibose_’s direction. @priyankachopra I am so proud of your work as both an actor and producer in this film. You made me smile, laugh and cry and I know you are going to impact so many people’s lives with this film. I love you so much.”

“Congrats to the entire The Sky Is Pink cast, crew and creative team. You should be very proud. Everyone make sure to go see this movie!,” added the singer-turned-actor.

It is after three years that Priyanka Chopra is making her comeback in Bollywood with The Sky Is Pink.

The Sky Is Pink is based on the life of Aisha Chaudhary, who became a motivational speaker after being diagnosed with pulmonary fibrosis. In the last few months of her life, she also penned a memoir titled My Little Epiphanies.

The film was screened at Toronto International Film Festival in August. Nick, who couldn’t join Priyanka for the big night as he was busy with his tour, send love and good wishes to wife on her special day.

Posting a picture of Priyanka, Shonali Bose and Farhan from TIFF as his Instagram story, Nick Jonas wrote, “Congrats @priyankachopra and the entire The Sky Is Pink team on yout tiff premiere!! This movie is so powerful.” 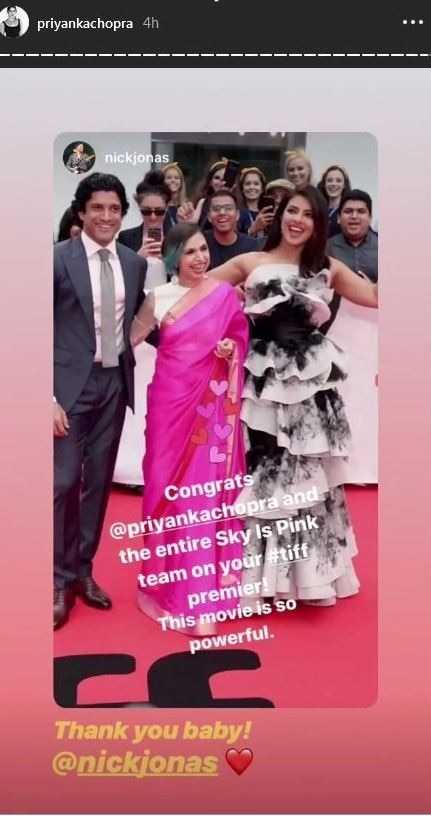 Priyanka in an interview to IANS revealed that The Sky Is Pink is a special film for her. “This is a very special film based on a special real-life couple who thrive through extraordinary circumstances. I feel like in a cynical world today where we live our own lives, this film shows you what it can do when you have a family, family support,” she said.

The film, which is set to hit the screens on October 11, has got a thumbs up from Nick Jonas.

| Priyanka Chopra on Zaira Wasim quitting Bollywood: Who are we to poke our nose in her business?

| Priyanka Chopra: Nick Jonas handled logistics for our wedding while I was shooting The Sky Is Pink

| Priyanka Chopra: Nick Jonas and I don’t give each other advice. We discuss our creative interests

Priyanka Chopra, Farhan Akhtar talk about working on The Sky Is Pink

Shahid Kapoor on Kabir Singh: Have had my self-destructive moments

Shahid Kapoor opened up about his dark moments where he felt that he had lost control. He said that his character in Kabir Singh is a phase in everyone's life.

Talent or no talent, you can’t let the team down: Ravi Shastri on Rishabh Pant